Recently I switched to the Colemak keyboard layout in order to type more pleasantly and avoid wrist injury. After those miserable weeks re-learning how to type, I thought, “Heck, why stop here when I could spend a few more weeks learning an entirely new physical arrangement of keys?” I mean, why not?

And so it was that a new adventure began, one that took me far out into the wilds of keyboard nerdom, but which in the end brought me closer to home—that is, the home row.

There are a few problems with standard keyboards: their straight (and oddly staggered) rows do not fit the natural shape of the hand, their modifier keys must be reached with the weakest fingers, and many common keys are far from the home row. (Despite Mavis Beacon, I never did learn how to type the number row without looking.)

So I set out in quest of a better keyboard, and it wasn’t long before I stumbled into the wonderful and awe-inspiring world of custom-built mechanical keyboards of all shapes and sizes: ortholinear, columnar-staggered, 40%, split, thumb cluster—plus dozens of key switches to choose from—oh, and have your soldering iron handy because typically these are built from kits.

I just want a decent keyboard, for Pete’s sake.

Fortunately, I found an easy way out for newbs like me who don’t want to invest a significant portion of a lifetime in acquiring a keyboard: the conveniently pre-made and inexpensive Keyboardio Atreus. I bought mine with BOX Brown key switches, mainly because by that point I had major decision fatigue and so I took Keyboardio recommends BOX Browns for newcomers. A decision saved is a decision gained, as they say.

A couple of broken-on-arrival key switches were promptly replaced with a care package sent by Keyboardio (great customer service!), and then I was ready for the next phase of the journey.

The Atreus has only 46 keys, instead of the usual 78-ish (laptops) or over 100 (desktops). So for most non-alphabetic characters, the Atreus has multiple layers which are accessed with Shift-like keys, but for numbers and symbols instead of uppercase letters (or like a laptop’s Fn key, but in a more reachable place). This is great because it’s easier to press a shift key plus a key near the home row, than to reach across the keyboard without layers. (Just imagine if a standard keyboard didn’t even have the Shift layer for uppercase letters. That would be a huge keyboard. Though maybe not this huge.)

If the default configuration of layers suits you well, then you can stop reading now and return to your normal life, living happily ever after with your new Atreus.

However, I wanted to take that great idea even further. To start off, here is the default layout of the Atreus: 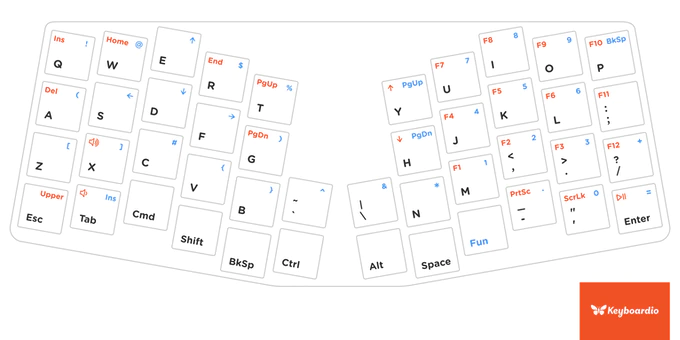 The outer thumb keys were hard to reach, and I didn’t like the placement of some symbols and numbers. The beautiful thing about the Atreus and other DIY keyboards is that they are entirely customizable. So I customized and customized, ending up with the layout below, shown one layer at a time. (The letter keys are QWERTY because I use Colemak via an installed keyboard layout, not hardcoded into my Atreus.)

This layout maximizes the time that my hands are in or near a natural position, in a few ways:

(Side note: while we’re talking about finger positioning, here’s a tip that I found by chance, in case you’re a new Atreus user struggling to reach Q and P with your pinkies: “Phil Hagelberg very helpfully replied that he designed the Atreus with the idea that you’d hit the q and p keys with a diagonal motion from your ring fingers instead of with the pinky extension from the traditional typing technique. This means that, when your pinkies rest on the a and ; keys, they’re already fully extended – they can’t comfortably extend further up, but can more comfortably fold down to hit the z and . keys.” A good decision, I think, considering the pinky finger’s limited range of motion.)

Below I’ve appended the code for my layout.

There is one AutoHotkey shortcut that makes this layout even more convenient, by making Alt + Enter act as Alt + Tab for switching windows. This way, window-switching mirrors tab-switching (Ctrl + Tab).

I love my Atreus, and I love that I can customize it to my taste and needs. It took several evenings to learn Kaleidoscope and tweak my layout to my satisfaction, and I am still getting used to this new way of typing, but it is time well spent. Already my fingers glide like they never have before, with none of the twisting and turning that slowed me down and strained my wrists on a standard keyboard.

And with that, my keyboard journey is over for now. It has taken a real effort to learn Colemak and switch to a nonstandard keyboard, but it was 100% worth it.

Besides getting this better keyboard, I’m also taking other steps to combat the aching in my wrists. More on that in a future post.